Becoming a Successful DJ and Making it Big! 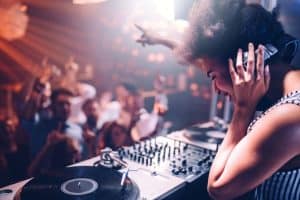 If you’re serious about becoming a full-time DJ, it’s easy to get disheartened when you see other DJs making it and thinking that you have so much work to do to reach their level. However, it’s important to remember that it took them years, maybe even decades to get the chance to showcase their talent. Set up realistic goals, don’t aim for the stars right from the bat because when you fail initially you will feel disheartened and that can have a very negative impact on your future. Find out what inspires the DJ gods, pushes them to reach further, and focus on becoming the sort of DJ you want to, be it a hip electronic DJ, or an 80’s retro.

Think of Yourself as a Brand

When you start to produce new tracks successfully, and you think that you are generally improving, start thinking of yourself as a brand. That is quite difficult because companies will pay entire teams to have successful branding. Start by finding a couple of outlets where you can showcase your music and then pick a name that you will not be changing any time soon. The reason as to why you need to stick to that name is that this business rewards consistency, and to become successful, you have to persevere and not give up.

The next step would be to set up a page on Soundcloud, Mixcloud, Facebook, Twitter, and YouTube, among other places so that people can get to listen to what you’re capable of. After you complete all of these steps, it is vital to remember that you should not see this line of work as a 9 to 5 job, because it doesn’t work like that. Since it requires a lot of creativity, it’s not something that can be forced.

Whenever you do not feel like you can produce some bangers, take a break and do other things like watching a movie, doing house chores, and don’t think about music. The thing about being a creative producer is that you will never know from where your creativity will come. There will be days where you will be producing terrific music, and you feel like you can make many tracks in one day, but on the other hand, there will also be days where you can’t even get a tune right. The secret to succeeding is not to give up when those bad days happen.

This is also a significant step since some people fail to launch their songs because they try too much. Exposure usually takes time, and you will want to do it naturally, by trying to get performance gigs whenever you can, even in the places where you don’t feel like your music will be truly appreciated. By performing at different venues, people with different tastes in music will get to hear your material, and while there will be people who won’t like it, you should keep in mind that there will also be people who will enjoy seeing a new artist trying to create their style. Now that you have the basics of how to make electronic music get out there and let the world hear your music.